> historic of medieval cuisine>Cookbooks>Norman Cuisine in the 13th century 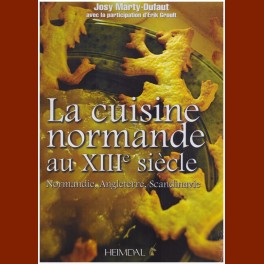 Norman Cuisine in the 13th century

This magazine focuses on recipes presented in Anglo-Norman and Scandinavian manuscripts. They are copies of earlier texts from France, Sicily, themselves copied from other texts or finding their source of inspiration in Greco-Latin culture and oriental cuisine.by Josy Marty-Dufaut Editions Heimdal.

By Josy Marty-Dufaut. Editions Heimdal. 64 full-colour, richly illustrated pages.
For a long time, 13th century cooking was little known, overshadowed by the emblematic works, Le Viandier de Taillevent and Le Ménagier de Paris, published in the 15th century.
The 13th century was a time of expansion, intense trade and cultural exchanges. It was the golden age for the Normans who settled in many countries. Western Europe presents a unity and a community never before known. The cuisine is a testimony to this European cohesion.
This book focuses on the recipes presented in Anglo-Norman and Scandinavian manuscripts. They are copies of earlier texts from France and Sicily, themselves copied from other texts or finding their source of inspiration in Greco-Latin culture and the cuisine of the East. The emblematic dishes that will make the reputation of Taillevent's cuisine already appear in them. The basics of medieval cooking are given. The culinary art is in constant evolution, there is never a revolution.
Acidic or sweeter flavours, refined colours, subtle perfumes, worked textures, the cuisine of the 13th century offers a wide and varied range of recipes, each as delicious as the next.