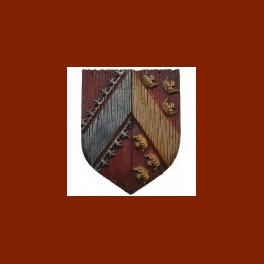 Coat of arms of alsace

Coat of arms of Alsace.  Handcrafted production
Coat of arms made of reconstituted stone, with a hanging system on the back.
Handmade paintings and patinas in the old wood style.

"As early as the 11th century, Gérard d'Alsace, the first Duke of Lorraine, had his troops display a red and white banner. In 1262, the bourgeoisie defeated the soldiers of Bishop Walther de Geroldseck in Hausbergen and adopted the latter's colours to celebrate their emancipation and their status as a free town. The town's citizens then took the habit of taking an oath before a red and white flag. In 1870, the red and white flags became the symbol of the Reichsland and of a certain regional resistance to the Prussian occupation. The cultural Alsace, carried by the Revue Alsacienne de Littérature makes it part of the legend. The brothers Albert and Adolphe Mathis wrote "Uff denne Wappe han'mer geschwore, de adle Fahne wiss un rot". In 1911, Emile Woerth's Elsässische Fahnenlied made the Alsatians say to the Alsatians: "Let us swear on our flag, my brothers from the Vosges to the Rhine: Never a foreign hand should seduce us, We want to remain faithful to Alsace!".