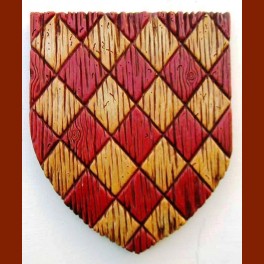 Coat of arms of Angoumois

Coat of arms made of reconstituted stone, with a hanging system on the back.
Handmade paintings and patinas in old wood.

"Origin: The arms are those of the Taillefer dynasty, who ruled the Angoumois, of which Wulgrin was the first representative. It was his grandson, William, who gave the name of Taillefer to the dynasty, because he is said to have been killed by a Norman leader with a sword that, despite the armor, split him from top to bottom! It is in memory of this glorious battle that these weapons (and their name) were later attributed to Taillefer. Indeed, one can speak of an allusion to the name (they are not talking weapons), because they are taillefers and trenches (and not a lozenge), repeated several times to recall the violence of the battle, all in the color of the Plantagenets, to legitimize their filiation"