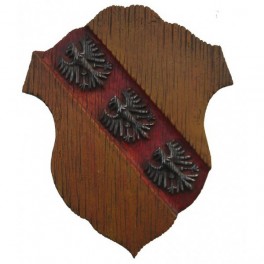 Coat of arms of Lorraine

Coat of arms of Lorraine
made of reconstituted stone, equipped with a system of hanging on the back. Paintings and patinas way old wood realized by hand. Dimensions: 25 x 30 cm approximately.  Weight: about 3 kg. Artisanal manufacture

"Or, on a bend Gules, three bars Argent.
Originally, it is in fact the coat of arms of the family of Alsace, from which the Dukes of Lorraine came. The first to adopt it would be Ferry De Bitche (1143-1207).

But as is often the case, the legend attributes several possible origins to it.
-All three would be due to the dexterity of Godefroid de Bouillon, who, during the capture of Jerusalem, would have succeeded in catching three unlucky birds on the same arrow.
-These birds would have been chosen because "alérion" is the anagram of Loraine or Loreina, the ancient spelling of the region.
-This coat of arms would be derived from the coat of arms of the House of Alsace, where the Dukes of Lorraine came from. The alérions (or eaglets) would thus symbolize the links with the Holy Germanic Empire and the House of Hohenstaufen.
-The three birds would symbolize the Holy Trinity.
Finally, the birds would evoke the three primitive bishoprics: Toul, Metz and Verdun.

History of the coat of arms: In 1420, Isabelle, the daughter of the last Duke of Lorraine, from the House of Alsace, married René I of Anjou, heir of Louis, Count of Bar. By this union René becomes Duke of Lorraine: in these arms he associates the three arms of Lorraine (thus of Alsace), Anjou and Bar.
At the death of his brother Louis III of Anjou, René I also became head of the family of Valois-Anjou.
On the death of Joan II of Naples, who designated him as his heir, he obtained the title of King of Naples, and thus became a pretender to the crown of Hungary and Jerusalem. His arms are thus modified and become a clever mixture of the previous ones:
Lorraine (thus Alsace), Anjou, Bar, Naples, Hungary and Jerusalem!
At the death of his mother Yolande of Aragon in 1443, the only daughter of King John I, he can also claim the throne of Aragon... the arms of this province join the six others on his coat of arms !!!
At the death of Isabella of Lorraine, his son the new Duke of Lorraine John II adopts this coat of arms and René then takes back those of Lorraine to his own...
In 1473, the Duchy passed to Rene II, son of a daughter of Rene I, who died in 1480, but Rene II only inherited the title of Duke of Bar because Louis XI, King of France, took over Anjou and Provence. Rene II decides however to keep his weapons; he marries Philip of Guelders, heiress of the duchies of Guelders and Juliers. Their son will be nicknamed Antoine the Duke with the four Kingdoms and the four Duchies: kingdoms of Naples, Jerusalem, Hungary and Aragon, duchies of Guelders, Anjou, Juliers and Bar...".
*** Translated with www.DeepL.com/Translator (free version) ***